Piazza Navona is a city square in Rome, Italy. It is built on the site of the Stadium of Domitian, built in 1st century AD, and follows the form of the open space of the stadium.[1] The ancient Romans came there to watch theagones (“games”), and hence it was known as “Circus Agonalis” (“competition arena”). It is believed that over time the name changed to in avone to navone and eventually to navona. Defined as a public space in the last years of 15th century, when the city market was transferred to it from the Campidoglio, the Piazza Navona was transformed into a highly significant example of Baroque Roman architecture and art during the pontificate of Innocent X, who reigned in from 1644 until 1655 and whose family palace, the Palazzo Pamphili, faced the piazza. It features important sculptural and architectural creations: in the center stands the famous Fontana dei Quattro Fiumi or Fountain of the Four Rivers (1651) by Gian Lorenzo Bernini, topped by the Obelisk of Domitian, brought here in pieces from the Circus of Maxentius; the church of Sant’Agnese in Agone by Francesco Borromini, Girolamo Rainaldi, Carlo Rainaldi and others; and the aforementioned Pamphili palace, also by Girolamo Rainaldi, that accommodates the long gallery designed by Borromini and frescoed byPietro da Cortona.

Piazza Navona has two additional fountains: at the southern end is the Fontana del Moro with a basin and four Tritons sculpted by Giacomo della Porta (1575) to which, in 1673, Bernini added a statue of a Moor, or African, wrestling with a dolphin, and at the northern end is the Fountain of Neptune (1574) created by Giacomo della Porta. The statue of Neptune in the northern fountain, the work of Antonio Della Bitta, was added in 1878 to make that fountain more symmetrical with La Fontana del Moro in the south. At the southwest end of the piazza is the ancient ‘speaking’ statue of Pasquino. Erected in 1501, Romans could leave lampoons or derogatory social commentary attached to the statue.During its history, the piazza has hosted theatrical events and other ephemeral activities. From 1652 until 1866, when the festival was suppressed, it was flooded on every Saturday and Sunday in August in elaborate celebrations of the Pamphilj family. The pavement level was raised in the 19th century and the market was moved again in 1869 to the nearby Campo de’ Fiori. A Christmas market is held in the piazza.

The Pantheon (/ˈpænθiən/ or US /ˈpænθiɒn/; Latin: Pantheon, [pantʰewn] from Greek: Πάνθεον [ἱερόν], an adjective understood as “[temple consecrated] to all gods”) is a building in Rome, Italy, commissioned byMarcus Agrippa during the reign of Augustus (27 BC – 14 AD) as a temple to all the gods of ancient Rome, and rebuilt by the emperor Hadrian about 126 AD. The building is circular with a portico of large granite Corinthian columns (eight in the first rank and two groups of four behind) under a pediment. A rectangular vestibule links the porch to the rotunda, which is under acoffered concrete dome, with a central opening (oculus) to the sky. Almost two thousand years after it was built, the Pantheon’s dome is still the world’s largest unreinforced concrete dome. The height to the oculus and the diameter of the interior circle are the same, 43.3 metres (142 ft). It is one of the best-preserved of all Ancient Roman buildings. It has been in continuous use throughout its history, and since the 7th century, the Pantheon has been used as a Roman Catholic church dedicated to “St. Mary and the Martyrs” but informally known as “Santa Maria Rotonda.” The square in front of the Pantheon is called Piazza della Rotonda. Pantheon is derived from the Ancient Greek “Pantheion” (Πάνθειον) meaning “of, relating to, or common to all the gods”: (Pan /”Παν” meaning “all” + Theion / “θειον”= meaning “gods”). Cassius Dio, a Roman senator who wrote in Greek, speculated that the name comes either from the statues of so many gods placed around this building, or from the resemblance of the dome to the heavens. Since the French Revolution, when the church of Sainte-Geneviève in Paris, was deconsecrated and turned into the secular monument called the Panthéon of Paris, the generic term pantheon has sometimes been applied to other buildings in which illustrious dead are honoured or buried. 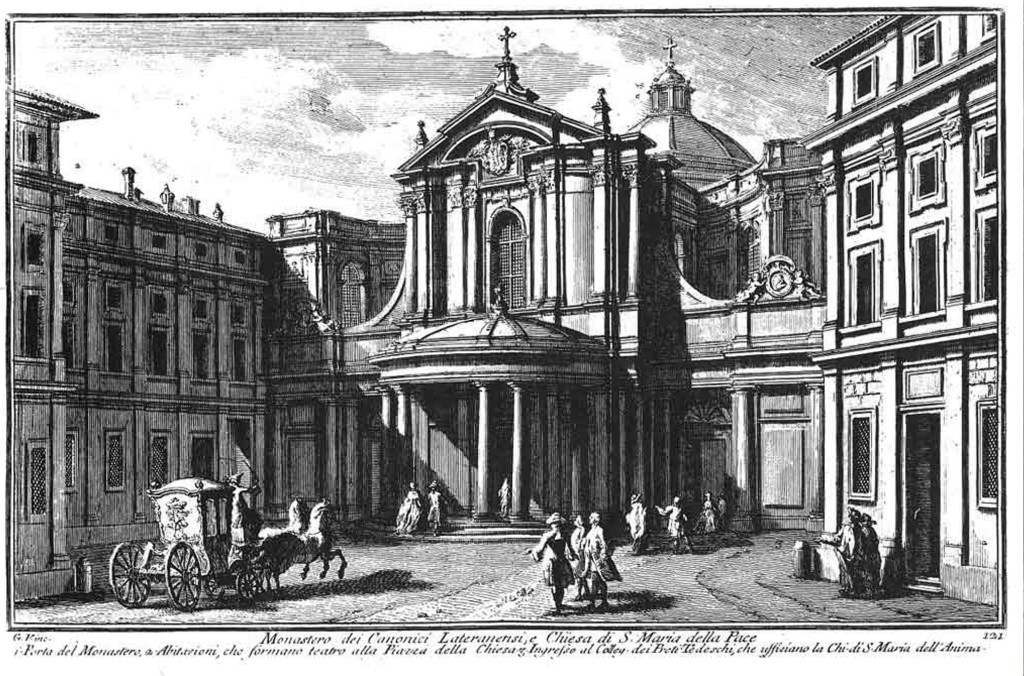 Santa Maria della Pace is a church in Rome, central Italy, not far from Piazza Navona. The current building was built on the foundations of the pre-existing church of Sant’Andrea de Aquarizariis in 1482, commissioned by Pope Sixtus IV. The church was rededicated to the Virgin Mary to remember a miraculous bleeding of a Madonna image there in 1480. The author of the original design is not known, though Baccio Pontelli has been proposed. In 1656–67 Pope Alexander VII had the edifice restored by Pietro da Cortona, who also added the famous Baroque façade projecting from its concave wings: this, devised to simulate a theatrical set, has two orders and is entered by a semi-circular pronaos with paired Doric columns. The church presses forward almost to fill its tiny piazza; several houses had to be demolished by Pietro da Cortona to create even this miniature trapezoidal space. This newly formed piazza, focussed on the church facade even in its architectural detailing, had the additional benefits of facilitating the turning of coaches which had become so fashionable with the Roman nobility of the time and creating an ingenious unified ensemble of the church in its urban setting. The play of concave and convex forms at varying scales in and around the predominant main facade masks the neighbouring buildings, extends the apparent breadth of the facade and so increases the visual impact on the spectator physically confined by the small trapezoidal piazza. The monumental effect of the plasticity of forms, spatial layering and chiarascuro lighting effects belies the actual scale of this urban intervention.The inscription around the porch architrave is taken from Psalm 72: SUSCIPIANT MONTES PACEM POPULO ET COLLES IUSTITIAM (“The mountains shall bring peace to the people; and the hills, justice”). This reference to the ‘mountains’ of the coat of arms of the Chigi family, to which Alexander VII belonged, is presumably an allusion to the benefits of his papal reign. Oak leaf motifs, another Chigi family emblem, can also be found on the facade. On the upper facade, Cortona had the curved travertine panels cut to make grained matching patterns, in an unusual use of this particular material. Through the tall central window, the circular window of the Quattrocento church facade is visible.

Santa Maria dell’Anima (English: Our Lady of the Soul) is a Roman Catholic church in central Rome, Italy, just west of the Piazza Navona and near the Santa Maria della Pace church. It was founded during the course of the 14th century by Dutch merchants, who at that time belonged to the Holy Roman Empire. In the course of the 15th century, it became the national church of the whole Holy Roman Empire in Rome and henceforth the national church of Germany and hospice of German-speaking people in Rome. According to tradition, the church received its name, from the picture of Our Lady which forms its coat of arms (the Blessed Virgin between two souls). Among the artworks housed inside is the Holy Family by Giulio Romano. It is the resting place of the Dutch Pope Adrian VI as well as of Cardinals William of Enckenvoirt and Andrew of Austria.

Santa Maria dell’Anima is one of the many medieval charity institutions built for pilgrims in Rome. The church found its origin in 1350, when Johannes (Jan) and Katharina Peters of Dordrecht bought three houses and turned it into a private hospice for pilgrims, at the occasion of the Jubilee of 1350. Jan Peters may have been a Dutch merchant or papal soldier; Dordrecht belonged to a region which later became independent as theNetherlands. They named the hospice “Beatae Mariae Animarum” (“Saint Mary of the Souls”). It was erected on its present site in 1386. In the 15th century Santa Maria dell’Anima expanded to be a hostel for visitors from the entire Holy Roman Empire, though initially the occupants were primarily from the Low Countries and (from the middle 15th century) the Rhineland.

The foundation of the hospice was confirmed by the bull of Pope Boniface IX on 9 November 1399, which granted it indulgences. In 1406, it was raised to the rank of a national institution and united with a Brotherhood governed by Provisors and a Congregation. On May 21, 1406 Pope Innocent VII in his bull Piae Postulatio declared the hospice exempted it from all but papal jurisdiction, and took it under his immediate protection. In 1418, it was greatly enriched by the legacy of its second founder, Diedrich of Niem. The Popes of the fifteenth century, with the exception of Pope Sixtus IV, showed it great favor. In 1431 a church was built on the place of the hospice’s chapel (consecrated by Pope Eugene IV in 1444) and the community was united with the German hospice of St. Andrew which had been founded in 1372 by the priest Nicholas of Kulm. During the fifteenth and sixteenth centuries Santa Maria dell’Anima became the national and religious centre as well as burial place in Rome of the Holy Roman Empire. Johann Burchard from Strasbourg joined the Confraternity of Santa Maria dell’Anima and rose to be its provost at the end of the 15th century. While he held this office, the decision was made to rebuild the church for the Jubilee of 1500. The present church which owes its Renaissance style to the influence of Bramante, was built by German subscriptions, between 1499 and 1522. It stands on the site of the older church, built between 1431 and 1499, and was decorated by the great artists of the period.

The church was built in the style of a hall church that was typical for Northern Europe, but which sits awkwardly amid the Italianate churches of Rome. Andrea Sansovino was retained as architect. The facade was completed by Giuliano da Sangallo. The new church was consecrated only on Nov 25 1542. During the Napoleonic occupation, the church was plundered and the sacristy used as a horse stable. In 1844, the (new) Belgian community moved to the Church of St. Julian of the Flemings. In 1859, under the influence of the era’s nationalism, the Confraternity was transformed to a German seminary and renamed the Collegio Teutonico di Santa Maria dell’Anima. Dutch Catholics retained the Anima as their national church, but after extended conflicts left it in 1939 (since 1992 the San Michele dei Frisoni near the Vatican has taken that role).